Yet again the Road Runners took on one of the highlights of the running calendar, the BTR Tour of Merseyside, from 30th June to the 6th July. This 52-mile 6-race event, a race format originally devised by the legend who is Ron Hill and applied locally by Alan Rothwell, is no mean feat. For those who haven’t taken up the challenge and want to know more, read on…

A 9 a.m. start saw eager (or perhaps just bleary-eyed) hordes of Tourists arrive at Southport’s Victoria Park to pick up their race numbers from the BTR paddock. As well as the race number, there’s also a handy “Tourist” name to stick on your back, so those taking part in The Tour can identify each other around the course. The Tourists are effectively ‘guests’ at Active Event’s Southport Half Marathon, but at roughly 500 they certainly make up a good size contingent. 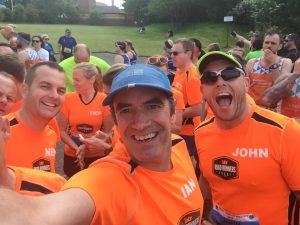 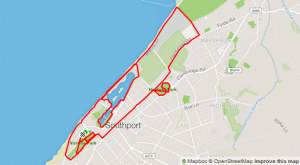 The Southport Half Marathon is an almost completely flat route. After leaving Victoria Park it passes some bewildered Radio Control car racers (engaged in their own challenge), before heading up the main street. There’s a series of twists and turns through genteel little Hesketh Park; then it’s out through the suburbs before reaching the long wide open spaces of the front and the Marine Lake.

Now, just because it’s flat doesn’t mean it’s easy. Southport weather for the opening stage of The Tour de rigueur is scorching sunshine; delight at a relatively cool morning turned to dismay amongst the runners, with mile after mile battling a headwind along the front. The one mile with the wind behind seemed scant comfort! But nevertheless, with a few last frustrating zig-zags through Victoria Park the finish line is waiting, and there’s a day-and-a-half for Tourists to recharge before the next race. 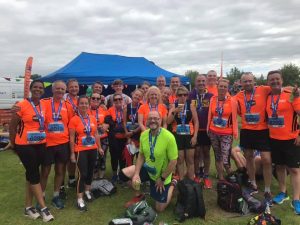 Monday evening saw everyone re-assemble, this time as part of The Tour in its own right, in the beautiful Wirral Country Park at Thursaston. 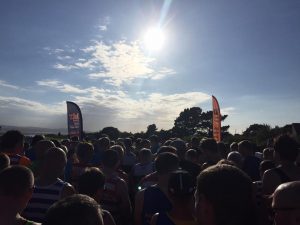 Although ‘only’ 6 miles (or 5.9) this race still isn’t easy. From the visitor centre, the route heads north for a kilometre on an access road; then turns south onto the beach for 2 miles or so. From here its a steady ascent on quiet roads, until the footpath into ‘The Dales’ in Heswall is reached. There’s a ‘challenging’ off-road section including the climb up the ‘Steps of Doom’; and then it’s back down; with a last few miles back along the Wirral Way. [Editor: fast miles? It’s easy, nice and flat that bit…] 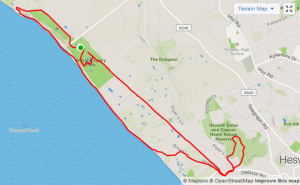 Tonight the weather gods were ever in The Tourists’ favour; the temperatures not too warm for a July evening, and even a following breeze along the beach. To make matters even better, the usually capricious beach offered a good few stretches where a firm line could be picked through the shifting sands and pebbles. Still, there was no better sight than Tom Rothwell at his usual marshall’s post atop The Dales, directing runners onto the welcome downhill. One day there will surely be a blue plaque there, marking ‘Tom’s Lookout’… A good few duels seemed to be going on in the closing stages through the field tonight! 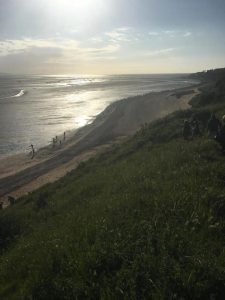 Oh, and for those not familiar with The Tour, every race from this one onwards features Hyacinth, selling possibly the best ice cream in Merseyside. 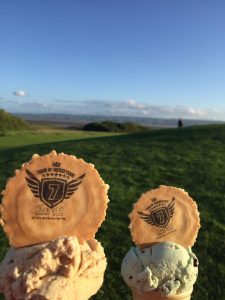 The following evening saw the Tourists reconvene at Walton Hall Park in Liverpool. ‘The Ralla‘ is the long closed Liverpool loop line, converted to a cycle way/footpath. 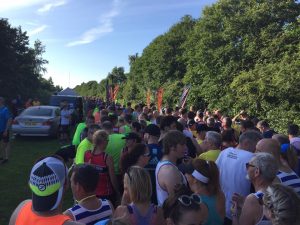 Mostly flat, this is one of the easiest routes of The Tour to describe: 2.5 miles north – turn and come back; 2.5 miles south – turn and head back for the line. Great fun, as with each turn point you’re almost constantly seeing your fellow Tourists running in the opposite direction. Sounds easy, right…? 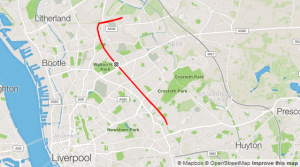 Once again the weather was still playing ball, and although warm was certainly not scorching – which is just as well, with most of this route in cuttings or shaded by trees ‘The Ralla Race’ can get distinctly sweaty! Liverpool Council added to the fun this year by not bothering to cut back the folliage, so there were plenty or hurddling opportunities in order to avoid the nettles on this flat route. Did I say flat? Ye gods, the long slow inclines seem more punishing than ascending to The Dales from sea level on Monday! Still, there’s the chance for Tourists to give themselves a big cheer at mile 7 in tonight’s race, because that’s halfway through The Tour! Finally, after one brutal little dip where the embankment slopes there’s the finish line, and the Tourists cross it happy in the knowledge that tomorrow is a rest day. 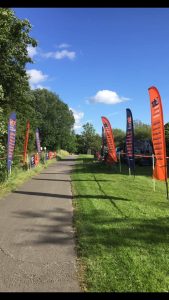 Wednesday in Tour Week is a rest day, and everyone approaches it in their own way. Some soak in a bath for as long as possible; others go for a few miles run, scared their legs will seize up; some remember there’s 4 days’ worth of laundry, cleaning and work to deal with; others, er, carb load!

If this is Thursday, this must be Otterspool.

Courtesy of Merseyside Police, Tourists can use their Sports & Social Facility as base camp for this race. The race route is another easy one to describe; round the field, down past Torro Rosso (F1 fans will know), all the way along the prom past the Britannia pub, play dodgems to avoid the multitude of bollards, turn and come back. (Finishing again with a lap of the field.) 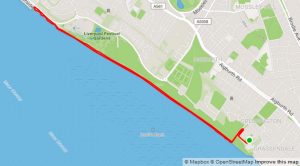 So, easy. Except that somehow, in an evolution lost in the mists of time (well, lost in the seven years of Tour history), The Tourists have conspired to make this event harder by all running it in fancy dress (well, almost all – not obligatory!). For the BTR Road Runners, this year’s theme was ‘Cops and Robbers’ (appropriate enough, given the venue) and let no one ever say that it is easy to run 5 miles whilst keeping your helmet on and swinging your truncheon… [Editor: stop right there!] 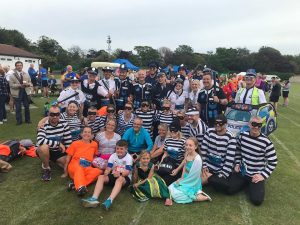 Off to the far east for the next challenge in The Tour (well, the east of Merseyside; well, OK, almost all the way to Whiston). Another largely off-road race to challenge those used solely to road running. Stadt Moers Country Park is a little gem of an oasis in this area, overlooked by many who speed past on the M57 or Chat Moss rail line. 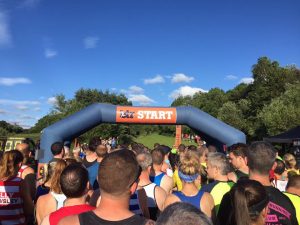 This course consists of two laps. The race begins with a charge straight up a hill [Editor: it’s a slope]; then over a mile twisting and turning in all directions before joining a firm path. There’s a circuit of a flat bit of parkland before another hill [Editor: still just another slope]; and then charging down to the finish line. Tourists remember, remember: grab some water at the end of the first lap, join the queue for an ice cream at the end of the second… 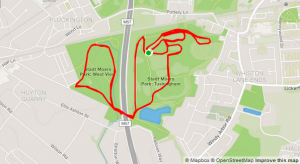 By this point in The Tour the wear on everyone is normally really starting to tell, which inevitably makes this race seem harder than it should. This year the Weather was hot but not scorching – although the ground beneath the grass has been baked harder than concrete over the past weeks, definitely making this even harder work than expected. And after this race there’s the thought which everyone carries: “I’ve got barely 12 hours to get home, eat, sleep, and get to the start line of the final event…” 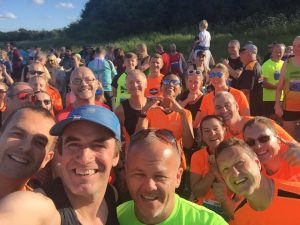 The final challenge of The Tour is the second longest race in the series. This starts from New Brighton (Harrison Drive), and the Tourists run west, all the way along the promenade, past Leasowe Lighthouse and Hoylake RNLI station, then out across the beach to a halfway point where they turn and come back the same way. Sounds easy? Believe me: never is there a race where jelly babies and water have been so important. 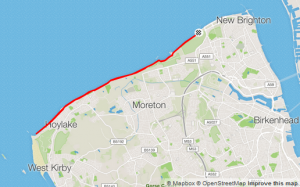 This final race starts at 10 a.m., 145 hours after everything began in Southport, and despite a lack of sleep or recovery time all the Tourists head off with cheers. (Or those may have been groans).

The weather gods again turn to mischief this year; there may not be the usual blazing sunshine that can dehydrate and cause many a case of exhaustion, but there is a vicious headwind. (All. The. Way. To. The. xxxxing. Halfway. Point!) Today is where it pays to not be too tall and find someone you can slipstream…!

Somehow the Tourists thread their way along the course and out across the beach – which after the delight of Thurstaston can best be described as ‘gloopy’, but there is the wonderful sight of BTR Teammate Dave Moore helping to man the water station.

By rights, the wind should be pushing everyone along on the return leg after the battering they received on the outward, but it sure doesn’t feel like that. Still, gradually the mile markers pass by, and the Tourists can tell themselves, “48 done, 49 done, 50…” This year the welcome support of the Race Angels were present in the closing miles, helping those runners struggling. Then it’s just the last mile, with the BTR Finish Line shimmering like a mirage along the promenade… and 52 miles (somehow) completed, a chance for everyone to celebrate a huge accomplishment.

Oh, and the chance to head off to the ‘after party’ – this year at Bierkellar.

Oh, but not before an ice cream from Hyacinth – did I mention there was ice cream? 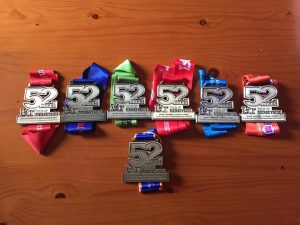 52 Miles done and dusted, the Tour or Merseyside 2019 Complete

The Tour is an immense undertaking, not just for all the runners but for all the arranging and organising that goes on. Thanks are due not just to Alan Rothwell for re-booting Ron Hill’s tour format and applying it to Merseyside, but also to the whole BTR crew, for whom this is an exceptionally busy week.

Thanks are also due to the numbers of people supporting and volunteering throughout the week – including, but definitely not limited to, Liz Leay, Dave Moore, Keith Peacock, Ed Beattie, Claire Dolan, and many many more.

And thanks are also due to all the runners (from all clubs and none) who really do dig in – not just into putting the miles in throughout the week, but who get involved in the whole ‘Tour spirit’.

Final overall results for The Tour are shown below – sorry folks, it’s gun time that counts in this one, not chip time! A special mention absolutely must go to Dave Ward who has absolutely excelled this week, being first in his age category overall. 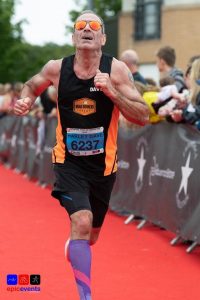 The eagle-eyed amongst the Road Runners will notice one name missing from the above list. The Tour is hard, and unfortunately one of our own was not able to take part in the last race. Wendy Marie Jones, when you are recovered, your club will run the last 12 miles with you, so that you can say you did indeed complete ‘The Tour’.